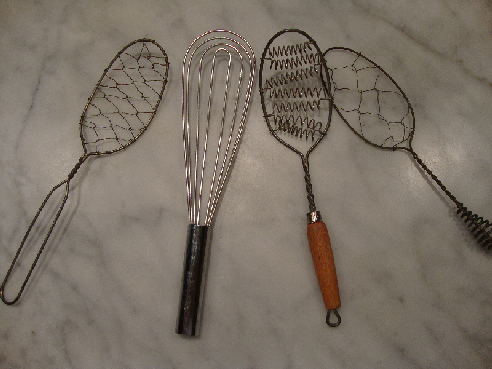 When whipping whites you can do the job by hand with a wire whip or with an electric mixer. For angel food cake, which uses about 14 egg whites, either elbow grease or electricity accomplish the task in minutes.

When I posted my recipe and technique for angel food cake, I included a picture of flat wire whips, which come in a variety of forms. How do they compare with a balloon whisk or the whipping attachment of an electric mixer?

Let’s take a closer look at these whips. They’re essentially shaped like large flat spoons.  The one on the far left has a lattice meshwork of stiff tin, the one next to it has thick stainless steel wires looping out from a metal handle, the whip that’s third from the left has six rows of wire coils going across the “bowl” of the spoon, and the one on the far right is similar to the one on the left, but the lattice network is looser.

All work extremely well in incorporating air into egg whites.

You can achieve similar results in a clean bowl with with a regular wire whip, but I think it’s ever so much more fun doing it this way?

Where can you buy flat wire whips? I’ve bought several on eBay and you can also find them at other online e-tailers. Cooking.com is a good place to start. And googling “flat wire whips” or “spoon whips” should also provide you with leads. Happy whisking!

And do let me know what you think of this method of whipping egg whites? 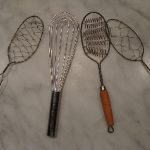 When whipping whites you can do the job by hand with a wire whip or with an electric mixer.