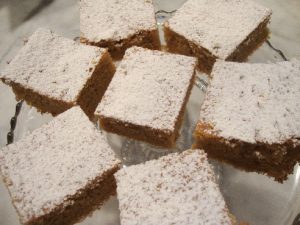 Just why this heavenly, light-textured and spiced sweet cake baked in a sheet pan has this name was clarified by food historian, William Woys Weaver. He says it was called “Spanish” because its concept was derived from a cake made in Latin America. And “buns” because it was cut into squares for serving, not because it was baked as individual buns. Today the recipe is attributed to the Pennsylvannia Dutch.

According to cookbook author Miss Eliza Leslie, the cake was eaten with afternoon tea. I’ve pretty much followed Miss Leslie’s recipe,with the exception that I use dry yeast, an electric mixer, and I’ve updated her method of preparing the batter. 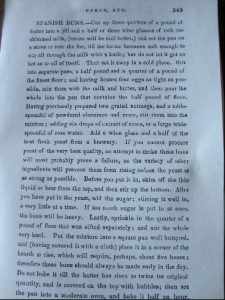 Miss Leslie, whose classic 1851 volume, Miss Leslie’s Directions for Cookery, contains this recipe says “These buns were first introduced by Mrs. Goodfellow; and in her school were always excellently made, nothing being spared that was good, and the use of soda and other alkalis being unknown in the establishment.” I introduced my adaptation of Spanish Buns in Baking in America.  In 2014, the Prepared Pantry website adapted my recipe to include a caramel topping.

Spanish buns are flavored with spices and rose water, a distillate of rose petals commonly in use in the nineteenth century.  Vanilla didn’t become widely used as a flavoring until late that century.  The batter for Spanish Buns is beaten long and hard to develop the wheat’s gluten.  Miss Leslie used a hickory rod for almost all her batters.  I use a KitchenAid mixer with the flat beater.  Lacking such a mixer, use a sturdy wooden spoon and be prepared for a work out.  For greatest accuracy, I also recommend you weight the flour.

Sometimes the baked cake sinks a bit in the center.  Not to worry.  That’s just the nature of the beast.  Good as Spanish Buns are with afternoon tea or coffee, I also like them at breakfast served with yogurt and fruit.

Greg Patent Baking Tip: To Sift or Not to Sift