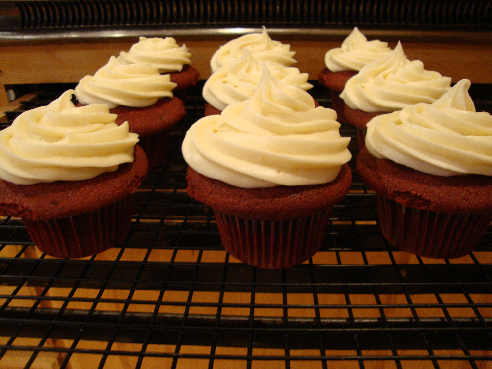 These crowd-pleasing cupcakes are as delicious as they look. The startling contrast between the crimson-colored cake and the white frosting just draws people in. The advantage of a cupcake over a slice of cake is that there’s more frosting to cake ratio.  Maybe that’s why cupcakes are always a big hit, especially with kids.

The many stories about the origin of red velvet cake are just that, stories. For the fascinating true story, read on.

Stella Parks, writing in Gilt Taste says that so-called Velvet Cakes began appearing in cookbooks in the last decades of the 1800s.  “Velvet” identified a cake that had an especially fine crumb, and the word “red” referred to red sugar, or what we know today as brown sugar. Chocolate found its way into cakes in the late 1800s, and we know today that the anthocyanin pigments in cocoa react with acids such as buttermilk and vinegar to give cakes a reddish hue. But this chemical reaction wasn’t nearly enough to impart the blazing red common in today’s red velvet cakes.

Enter John A. Adams, owner with his family of a business that made food colorings and flavoring extracts. Begun in 1888, the business fell on hard times in the 1930s during the Depression.  In an effort to boost sales, he added his red dye to a velvet cake, made a huge color photo of it, and began hawking his products in groceries all over the Midwest and parts of the South. Given the nation’s bleak mood at the time, Red Velvet Cake became a sensation.

Adams provided a recipe for his cake along with a purchase, and over time the recipe has been tweaked and labored over by countless food editors and home cooks. Ms. Parks has devised her own recipe for Red Velvet Cake, shunning the dye in favor of red wine.

Now it’s my turn. I do add red food coloring but only 2 teaspoons instead of tablespoons. I also add enough cocoa to give the cakes a definite chocolate taste, and I use a generous combination of butter and shortening for tenderness. These cupcakes have that velvet cake hallmark: A fine crumb.

The startling contrast between the crimson-colored cake and the white frosting just draws people in. The advantage of a cupcake over a slice of cake is that there's more frosting to cake ratio.
Print Recipe
Course Dessert