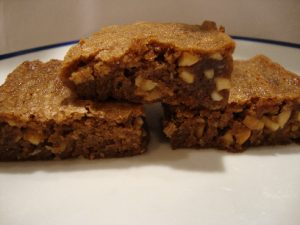 Butterscotch, cooked sugar with butter,  is always a winner in my book.  There’s just something about sweet, toasty, butteriness that makes it irresistible. In the recipe here, I’ve paired it with crunchy roasted peanuts in a blondie version of a brownie.  And the combination is, well, wow! The cookies are very moist, not too sweet, and–let me warn you–it’s hard to stop eating them.

Peanuts, not really a nut but a legume, are highly nutritious. It wasn’t until George Washington Carver proselytized and popularized peanuts that they became totally accepted by all segments of the American public.

Back in 1902, soon after George Washington Carver began his historic work on peanuts, Mrs. Rorer, a prolific cookbook author and renowned cooking teacher in the late nineteenth century, printed this method for making peanut butter.

Roast the nuts, shell and blow off the brown skins. When making it in large quantities, it will pay to have a bellows for this purpose, or put the peanuts on a coarse towel, cover them with another towel, rub them gently, then blow off the skins. If you use salt dust them lightly with it and grind at once. Pack the butter into glass jars or tumblers, cover them and keep in a cool place. This may be used plain or diluted with water.

Mrs. Rorer’s peanut butter would separate over time, the oil rising to the top, making it necessary to stir it back into the thick paste underneath. It would be 21 years, 1923, before J. L. Rosefield found a way to keep peanut butter from separating. The process was used commercially by Peter Pan® peanut butter. Ten years later, Mr. Rosefield would market his own brand of peanut butter and call it Skippy®.

Mrs. Rorer didn’t use her peanut butter in cookies. In fact, according to Jean Anderson in The American Century Cookbook (Clarkson Potter 1997), the first recipe to use peanut butter in a cookie didn’t appear until 1915.

The batter is made quickly in a saucepan. Be sure not to overbake. The cookies must be moist and chewy. The cookies are very moist, not too sweet, and–let me warn you–it’s hard to stop eating them.
Print Recipe
Course Dessert, Light Snack
Cuisine American
Servings 16 Cookies