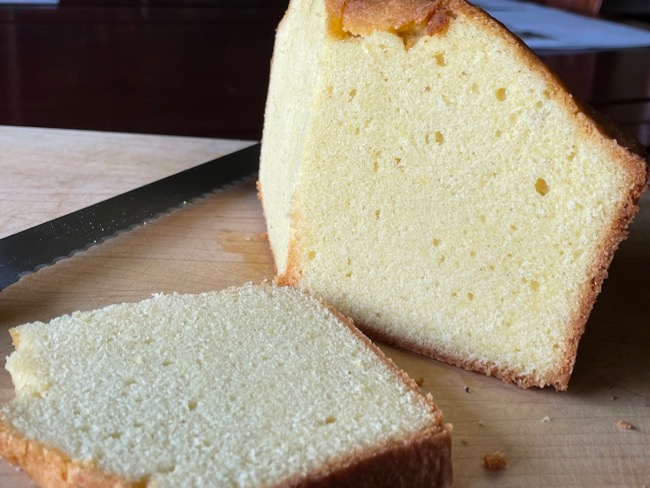 I’ve been thinking about pound cakes a lot lately. Historically English, they made their way to America with the colonists. The very first cookbook written by an American and published in America, (American Cookery by Amelia Simmons, 1796) has this recipe: “One pound sugar, one pound butter, one pound flour, ten eggs, rose water one gill, spices to your taste; watch it well, it will bake in a slow oven in 15 minutes.” The significant thing about this recipe is that it calls for one pound each of the first four ingredients. In Amelia Simmons’s day, 10 eggs weighed 1 pound.

What’s most notable is the lack of directions. Women were expected to know how to put together a pound cake. And every household had a scale. Standardized measuring cups were 100 years away!

Pound cakes and I became friends in 1976. I remember the time precisely because that’s the year I bought “Maida Heatter’s Book of Great Desserts,” (Knopf, 1974), and began baking my way through the entire book. Of the seven recipes in her Pound Cakes chapter, my favorite is Toni’s Pound Cake, named for Maida’s daughter. That recipe calls for a pound each of three of the four fundamental ingredients: flour, butter, and eggs. But there’s almost 1 1/2 pounds of sugar! Why?

Aside from its powers to sweeten, sugar also tenderizes and preserves. That extra jolt of sugar would help keep that pound cake tender for many days at room temperature.

The picture above is Toni’s Pound Cake made with one pound each of butter, sugar, eggs, and flour. I flavored the cake as Maida did with vanilla, lemon zest, lemon juice, and mace. The texture is firm, but not dense. It’s a large, sturdy cake, capable of serving a lot of people over many days. True pound cakes lack chemical leaveners, and that is one reason they stay fresh for many days at room temperature.

Pound cakes can come in many sizes. My loaf recipe here is basically a half-pound cake. And my article in Gastronomica is a plea to stop calling cakes pound cakes that really aren’t pound cakes. How do pound cakes rise without chemical leaveners? The vigorous beating of the butter and sugar creates millions of tiny air bubbles. Those bubbles, along with the bubbles created from beating the eggs, expand the batter upward in the oven’s heat.

To make Toni’s Pound Cake you beat 1 pound of salted butter with the flat beater of a stand mixer until smooth. Beat in 1 tablespoon vanilla and 1/2 teaspoon mace. Gradually beat in 1 pound (2 1/3 cups) sugar. Scrape the bowl and beater and beat for 6 minutes at medium high speed, stopping to scrape the bowl and beater two or three times. Beat in 10 large eggs two at a time until thoroughly incorporated after each addition. On lowest speed gradually beat in 1 pound sifted all-purpose flour only until smooth. By hand, stir in the finely grated zest of 2 lemons and 3 tablespoons lemon juice.  Turn the stiff  batter into a two-piece 10 x 4-inch buttered tube pan, lined on the bottom with buttered wax paper or parchment and dusted lightly with fine, dry bread crumbs. Smooth the top and cover the pan with a piece of aluminum foil large enough to fold down loosely around the pan sides. Bake in the lower third position of a preheated 350-degree oven for 30 minutes. Then, quickly, open the oven door and lift off the foil. Continue baking for 75 minutes more. Total baking time is 1 hour and 45 minutes. A cake tester or wooden skewer will come out dry. Cool the cake in its pan on a rack for 20 minutes. Cover with a rack and invert. Remove the pan and paper. Cover with another rack and carefully invert again so cake is right side up. Cool completely. Wrap snugly in foil and let stand overnight before slicing and serving. Pound cake is best served in thin slices.