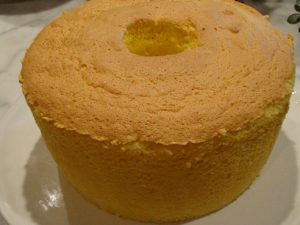 In my previous post, Maida Heatter and the Half-Blood Prince, I told the story of how I came to master a recipe from Maida Heatter’s Book of Great Desserts, a recipe that had given me heartbreak and tears for four years: Mildred Knopf’s Orange Puff Cake.  When I finally got it to work, it really did turn out to be a sublime cake: Light-textured, moist, and flavorful, and a baking achievement.

Maida says to make the cake by hand and to whip the whites with a flat wire whip.  Then you slowly dribble in a hot sugar syrup to transform the whites into an Italian meringue.

In the revised edition of her book (Andrews McMeel, 1999) Maida says some of her friends make this cake in an electric mixer, but she tried it that way herself and says she does not recommend it for this cake.  I tried making it once with my KitchenAid and it was a resounding flop: flabby, compact, and not very pretty to look at.  This is why I only gave instructions for making this cake Maida’s way in my previous post.  End of story, so I thought.

My friend, Dianne Jacob, after reading “Maida Heatter and the Half-Blood Prince,” asked  if a mixer would work.  My first impulse was to tell her what I wrote above.  Then I thought, Why on earth wouldn’t a mixer work? It does a great job with angel food cake and sponge cakes, why not this cake?  Why did it not work for me the time I tried it?

The critical step in Orange Puff Cake is transforming plain whipped egg whites into an Italian meringue.  When you make the cake by hand, you hold the pan of hot sugar syrup high above the beaten whites and add it in a fine slow stream while your other hand beats and fluffs the whites with the flat wire whip.  The point is to add the syrup in such a way that the whites do not cook and they get well-aerated during the process.  Once the syrup’s in, you’re supposed to set your meringue bowl into a large bowl of cold water and continue beating for several minutes until the meringue forms stiff peaks and feels cool or tepid.

I knew my mixer did a great job making meringues of all kinds, but could I add the hot syrup to the beaten whites with the mixer running on medium low speed slowly enough and hold the pan high enough without the syrup dribbling everywhere but into the mixer bowl?  This was my challenge. 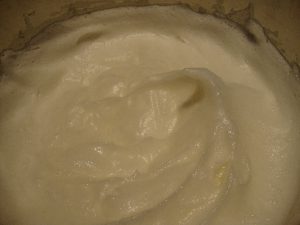 I beat the 1 ½ cups egg whites, about 12 large, (they were 60 to 65 degrees, a bit cooler than room temperature) on medium speed with the whip attachment until they became frothy.  Then I stopped the machine and added 1 teaspoon cream of tartar through a fine sieve.  I beat 1 minute more on medium speed, just until the whites started to turn creamy looking.

For the syrup, I put 1 1/3 cups sugar and 2/3 cup water into a small heavy saucepan (3- to 4-cup capacity) and set the pan over medium heat.  When the water came to the boil and the sugar had dissolved (you can stir it once or twice), I raised the heat slightly and let the syrup boil vigorously without further stirring.  I took the temperature of the syrup frequently with a digital probe thermometer, and when the syrup reached 215 degrees, I left the syrup bubbling away and went back to the whites.  Target temperature for the syrup at sea level is 234 degrees. (But remember to subtract 1 degree for every 500 feet above sea level).  My target: 228 degrees.

I started whipping the whites again on medium speed and kept beating until they looked moist and formed stiffish peaks when the beater was raised. 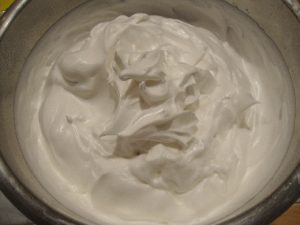 I turned the machine off and left the whites alone while I went back to monitor the temperature of the syrup.  Target temperature attained.  Syrup pan in hand.  Time to make the Italian meringue.

On  the mixer went to medium speed. I held the syrup pan about 6 inches above the rim of the mixer bowl and began adding the syrup slowly to the whites.  The speed of the rotating whisk mixed the hot syrup in quickly.  Feeling brave, I gradually raised the syrup pan until it was more than a foot above the mixing bowl, and continued adding the syrup to the whites.  This method worked like a charm.  It took about a minute and guess what?  No mess!

I increased the speed to medium high and kept beating away for several minutes more until the meringue almost filled the 5-quart bowl and became shiny, stiff, and felt warm to the touch.  Because there was no room in the bowl to fold in other ingredients, I scraped the meringue into a wide stainless steel bowl.  In the process, the meringue cooled to tepid. 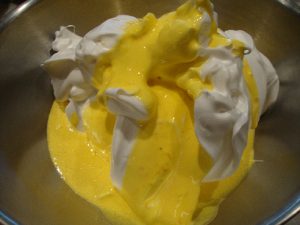 In a medium bowl with a hand-held electric mixer, I beat 7 large egg yolks until very thick and lemon-colored, about 5 minutes.  On low

speed I beat in the finely grated zest of 1 orange and 4 tablespoons fresh orange juice.  I poured this over the whites and folded it in carefully.

In 4 additions, I sifted on the flour and salt and folded them in as carefully as I could with a large rubber spatula to preserve as much of the air possible in the batter.  I rinsed a two-piece aluminum angel food cake pan with cold water and shook out the excess.  Then I scraped the batter into the pan, smoothed the top, and ran a table knife in concentric circles through it to break up any air pocket.  The pan was ¾ full. 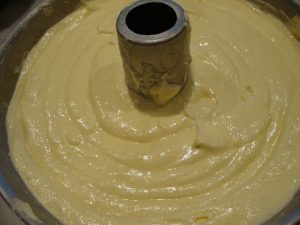 To bake the cake, I put the pan into a cold oven.  Then I turn the heat on to 325 degrees and bake the cake for 45 to 50 minutes. I find unheated ovens work best for puff cakes because the air bubbles expand gradually, making for a more stable and even foam.  There’s less chance of the cake collapsing, and it’s a good way to get a cake with an even texture.

Oven time is when I get really nervous, especially when I’m trying something new.  I didn’t even peek through the oven door once because I couldn’t bear the thought of a collapsed cake.  I needn’t have worried. The cake rose beautifully, a full inch above the pan rim.  Magnificent.

The cake’s top was a nice golden brown and it sprang back when I pressed the center gently.  Whoopeee!  The mixer worked!

To cool the cake, I hung it upside down on the neck of a wine bottle.  Don’t worry, it won’t fall out of the pan while your’re not looking.  Cooling upside down helps to expand the cake’s structure. 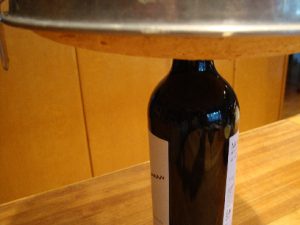 I set the cake on a platter and cut portions with a serrated knife.  The cake’s internal structure was porous but the bubbles weren’t overly large.  They were just right.

So thanks, Dianne, for your question.  I now know Mildred Knopf’s Orange Puff Cake can be mastered by hand or by machine.  The devil is in the details.