Originally posted on February 12, 2013
in Meringues,Recipes 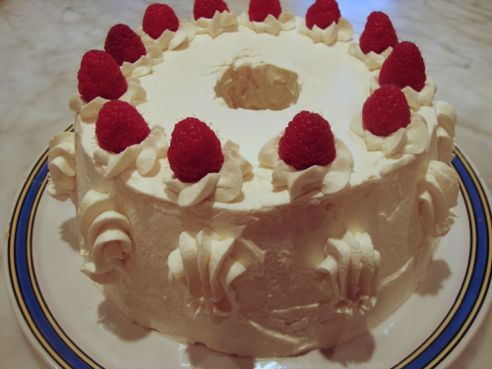 My goodness, but this recipe brings back memories.  I began making it decades ago and included it in an episode of my  Montana television cooking show, Big Sky Cooking.  I had decided to do a show on meringue because I was—and still am—absolutely fascinated by how gloppy egg whites beaten with sugar transforms them into a billowy white cloud-like meringue.  I had found numerous recipes for something called Overnight Meringue Torte in newspapers and magazines where a stiff meringue is packed into a tube pan and placed into a hot oven.  The instructions said to turn the oven off immediately and leave the torte in the oven overnight, at least 8 hours.  But how strange was that?  And what was supposed to happen?  Magic.  That’s what happens.  As the oven cools, the inside of the torte cooks to a creamy smoothness—it will melt in your mouth—and its top develops a crunchy crust.  After taking the torte out of the oven the top may be all cracked and uneven, and you may scream in anguish.

But don’t panic.  If the crust is thin, gentle tamping with your fingertips will even things out.

And if the top crust is very thick, and even caved in, you can remove some of it to crumble up and use as a decoration.  And whipped cream will fix up any other cosmetic damage.  Here’s the torte all gussied up.

To celebrate my decades-long connection with this recipe, I’m integrating blast-from-the-past black and white images from the companion cookbook to my TV cooking show along with new color shots.

No beating around the bush.  This is a very sweet dessert.  What I do is pass a nice tart sauce to serve with it.  In the winter I use frozen thawed raspberries, and in the summer I’ll use fresh strawberries or raspberries.

Some tips for success:

1. Make sure the egg whites are at room temperature.  Separate the eggs while cold and place the whites into a clean, grease-free mixing bowl.  Let the whites stand until they’ve lost their chill.  If you have frozen egg whites, thaw them in their container and then put them into the mixing bowl.

2. Using very clean beaters, or the whip attachment of a stand mixer, whip the whites on medium speed until they become frothy.  Add the cream of tartar and whip until the whites form droopy peaks when the beater is lifted up.

3. Once the whites have reached this stage, begin adding the sugar.  While beating on medium speed, add the sugar no more than 2 tablespoons at a time and wait about 15 seconds between additions.  Be patient.  It will take about 10 minutes to add all the sugar.

4. Beat in the flavoring, increase the speed to high, and beat about 5 minutes more (or longer) until the whites form very stiff upright peaks and the sugar has been thoroughly dissolved (rub some meringue between your fingertips to feel if there are any sugar granules).  The meringue must be very, very stiff! (Yikes!  That’s me 30 years ago)

Place dollops of the stiff meringue into the pan in installments, packing it down each time.

When all the meringue is in the pan, smooth the top with a rubber spatula.

After baking, when the torte is ready to be unmolded, lift it out of the pan by the tube.  If it sticks to the pan, run a thin-bladed knife around the edge of the torte to release it.

When the torte is out of the pan you’ll see a bit of thick syrup pooled on the bottom lip of the sides of the pan.  This is normal.  To unmold the torte, loosen its bottom with a thin-bladed knife.

You can leave the unmolded torte at room temperature loosely covered with plastic wrap for several hours before decorating it.  Refrigerate  after decorating. The dessert cuts beautifully.  Serve the dessert cold with the raspberry sauce.   Refrigerate leftovers.

Notice the texture of the torte.  It is very smooth and creamy.

1. Adjust an oven rack to the lower third position and preheat the oven to 425 degrees.  Coat a two-piece 10 x 4-inch tube pan with cooking spray making sure all surfaces, including the central tube, are covered.

2. Beat the whites on medium speed about 30 seconds until frothy.  Stop the machine and add the cream of tartar.  Beat on medium speed 1 to 2 minutes more or until the whites form peaks that droop at their tips when the beater is raised.

3. While beating on medium speed, gradually sprinkle in the sugar 1 to 2 tablespoons at a time and waiting about 15 seconds between additions.  After all the sugar has been added—in about 10 minutes—beat in the salt and vanilla.  Scrape the bowl, increase the speed to high, and beat until the meringue forms very stiff unwavering peaks, 5 minutes or more.

4. Transfer some of the meringue by spoonfuls onto the bottom of the prepared pan.  Pack down with a rubber spatula to eliminate air pockets.  Repeat 3 or 4 more times, until all the meringue has been placed in the pan.  Smooth the top with the spatula and put the pan in the oven.

Immediately turn the oven off, and do not open the oven door for at least 8 hours.  The torte can sit in the cold oven longer if necessary.

5. If the top crust is thin, just tamp it down with your fingertips.  If it is thick and cracked, remove the torte from the pan by lifting it up by the central tube, and slice the top off the torte with a sharp knife to use as a decoration later.  Run a knife under the torte to release it from the pan bottom and also run the knife around the central tube.  Unmold onto a dessert platter.

6. Whip the cream, confectioners’ sugar, and vanilla in a large chilled bowl with chilled beaters until cream is thick enough to hold its shape and spread easily.  Spread most of the cream on the top and sides and central hole to cover completely.  Any cracks or blemishes in the torte will be concealed by the cream.  Pipe the remaining cream through a pastry bag fitted with a star tip to decorate the torte.  Make rosettes on the top and place a fresh raspberry atop each.  If you have some meringue crust, crumble it and sprinkle it over the top.  Refrigerate.  The torte keeps well for at least a day, but is best on the day it’s made.  Serve with the raspberry sauce.