Maida Heatter and the Half-Blood Prince 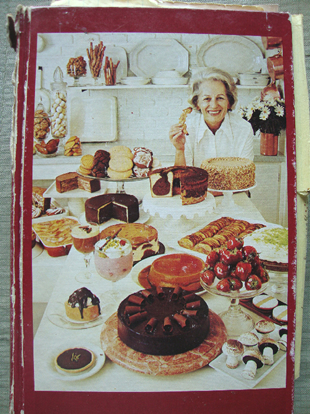 In the sixth Harry Potter book, the boy wizard uses a notebook in his potions class inscribed as being the property of someone called the half-blood prince. The formula instructions have been altered with hand-written notes, and Harry decides to follow them instead of the printed word. Harry succeeds and his classmates fail. What are we to make of this? I’d say the half-blood prince, through systematic trial and error, enabled Harry to achieve his goals.

Maida Heatter is my baking guru. In September, 2016, she turned 100 years old! Happy Birthday, Maida. Her first book, Maida Heatter’s Book of Great Desserts, published in 1974 by Knopf, so captivated me that I felt compelled to make every recipe. All 267 of them. It took me eighteen months, but by the end of it I had learned so much about baking and dessert making that I’ve carried those lessons with me ever since. If blogging had existed then, I’d have happily reported my experiences as I baked and ate my way through the book.

Despite Maida’s meticulously developed formulas, I tweaked many recipes that worked perfectly well but didn’t necessarily suit my tastes, and in some cases I had better results when I changed oven temperatures slightly. Like the half-blood prince, I made notes in the margins of the book. But even after following Maida’s directions carefully, I had one real failure: Mildred Knopf’s Orange Puff Cake. Failure in a Maida Heatter recipe? Highly unusual. So I wrote Maida, telling her my woes, and she wrote back very sympathetically but said she couldn’t help me at all because she has never lived at high altitude. Missoula, Montana, where I live, is 3,400 feet above sea level. And this is where high altitude baking problems usually first arise.

Mildred Knopf’s Orange Puff Cake gave me such troubles it took me about 4 years of on and off testing before I got it to work. Here are my notes scribbled onto a page of the printed recipe. 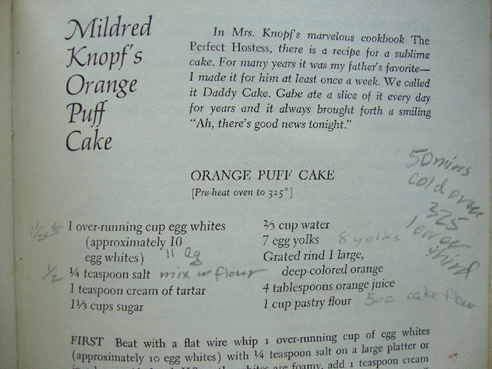 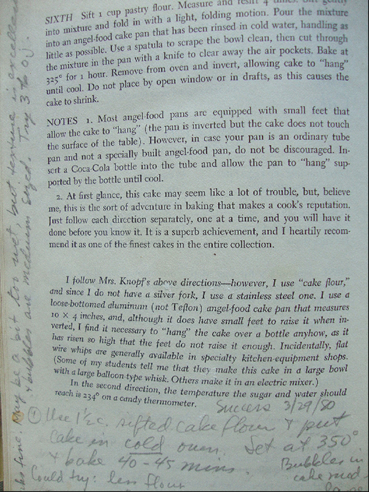 Looking back all those decades now, I liken myself to the half-blood prince in spirit, tweaking the recipes to match my style and my taste. And I imagine most bakers, women included of course, are also like him, because fiddling and adjusting and just plain mucking around are in our blood in our quest for perfection. So never feel that you must always follow a recipe religiously—that’s only needed the first time. After that, feel free to improvise, and don’t feel bad about writing your changes right into a cookbook!

Here, then, is the way I make Orange Puff Cake now.

1. Put the egg whites into a large wide grease-free bowl (mine is stainless steel and measures 13 ½-inches across and 4 ¾-inches deep). Start beating slowly with a flat wire whip until the whites become frothy. Pass the cream of tartar through a small fine strainer, sifting it over the whites. Continue beating for several minutes more until the whites have thickened and increase in volume and form moist peaks that droop and curl at their tips when the beater is raised. Do not beat until whites form stiff unwavering peaks. 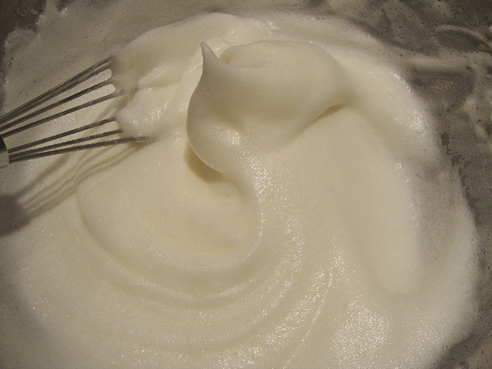 2. Put the sugar and water into a small heavy saucepan and set the pan over medium heat. Stir occasionally with a wooden spoon until the sugar dissolves and liquid comes to the boil. Increase the heat to medium high, and boil until the syrup registers 234˚F. on an instant-read thermometer, about 5 minutes. (NOTE: This is a temperature for sea level. For every 500 feet gain in altitude, decrease the temperature of the syrup by one degree Fahrenheit).

Immediately remove the pan from the heat. Holding the pan high above the egg whites, slowly pour the syrup into the whites in a thin stream while mixing and folding it in with the flat beater. If you add the syrup too rapidly, it will cook the whites.

Continue beating the whites, rotating the bowl as you work, using a gentle lifting motion with the flat beater to give the whites a silky, airy texture. Beat only until the meringue forms moist and creamy-looking peaks that that curl a bit when the beater is raised. The whites will feel warm. 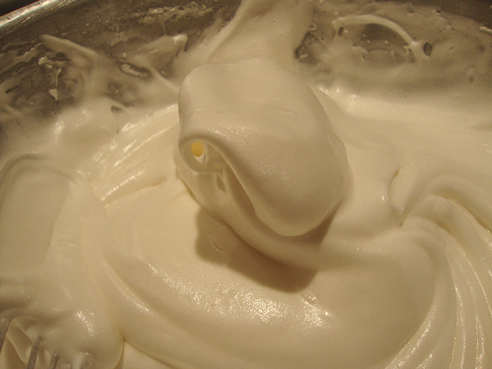 Beat the egg yolks in a small bowl with a hand-held electric mixer on medium-high speed until very thick and lemon-colored, about 5 minutes. Add the orange zest and juice and beat on low to mix well.

Sift the cake flour with the salt four times to aerate and return to the sifter set on a sheet of waxed paper. Rinse a two-piece 10- x 4-inch aluminum tube pan with cold water and shake off excess water. Adjust an oven rack to the lower third position and preheat the oven to 325˚F. At elevations above 3000 feet do not turn the oven on.

Pour the egg yolks over the meringue and fold them in gently with a large rubber spatula. When folding, cut down into the center of the meringue with the rounded side of the rubber spatula going right to the bottom of the bowl and bring up some of the meringue, flipping it over the yolks. Rotate the bowl about a quarter turn with each folding motion. Work quickly but with a light hand to deflate the whites as little as possible. It’s all right if you see a few streaks of yolk and white at this point.

Sift about a quarter of the flour over the batter and fold it in carefully. Repeat with three more additions, folding only until no flour shows. 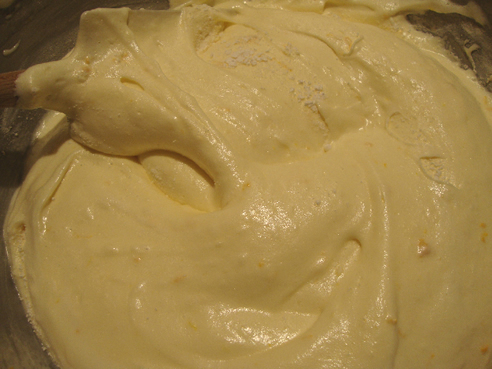 Scrape the batter into the cake pan and spread level with the rubber spatula. Run a table knife through the batter in concentric circles to break any large air pockets. The pan will be almost full.

Put the pan in the oven, and if you haven’t preheated the oven, set the thermostat to 325˚F. Bake about 50 minutes, until the top of the cake is a deep golden brown with a few cracks. The cake will spring back when pressed lightly in the center. During baking will rise an inch or more above the rim of the pan. Hooray! Success!

When baked, hang the cake pan by its central tube upside down over a narrow-necked wine bottle. Let stand until cake is completely cool, about 3 hours. Don’t worry, the cake will not fall out of the pan.

To remove the cake from the pan, insert a long thin-bladed knife between the cake and the sides of the pan and rotate the pan slowly to release the cake. Lift the cake out of the pan by its central tube and run the knife under the cake to free it from the bottom of the pan. Carefully invert onto a wire cooling rack, remove the pan bottom, and invert the cake again onto a dessert platter. Cut portions with a serrated knife. Keep cake covered at room temperature, where it will stay fresh for up to 4 days. Doesn’t it look gorgeous? 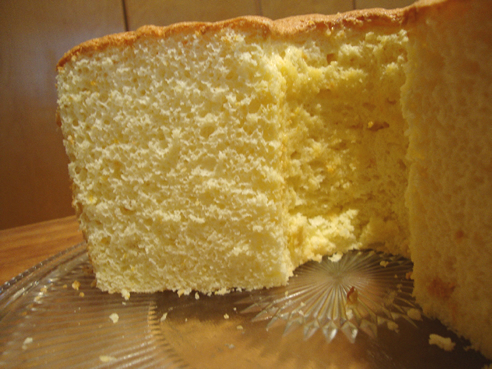 4 thoughts on “Maida Heatter and the Half-Blood Prince”