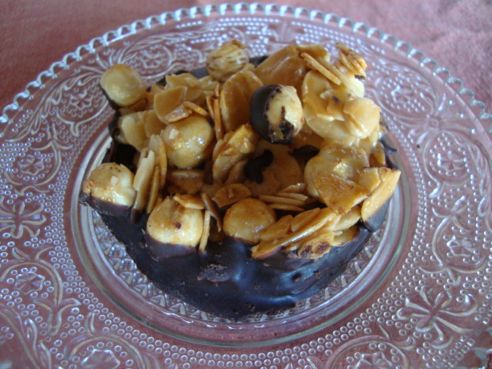 A long, long time ago, in the mid-1980s, my wife and I made a stop in Ketchum, Idaho, on our way home to Missoula, Montana.  We got a bite to eat and then wandered about town to get the lay of the land.  Always on the lookout for bakeries, we stepped into Pendl’s, and were immediately transported to another world.  If there’s a pastry heaven, Pendl’s was it.  I had never seen so many artful pastries in my life and knew I was in the presence of a master patissier.

Fred Pendl, the Austrian owner and baker, was manning the store, and he described each of his creations to me.  Although I can’t recall all he showed me, one particular pastry stood out, the one in the photo above, a round thin shortbread-like cookie layered with candied sliced almonds and hazelnuts and coated with a thin layer of bittersweet chocolate on the bottom and edges.  The combination of flavors and textures knocked me for a loop.

I wanted to buy up everything in sight but compromised by scaling down to an assortment that could fit into a box.  After we got home and devoured Fred’s creations, I vowed to stop in at Pendl’s the next time we’d be in Ketchum.  That turned out to be about ten years later.  Ketchum had grown so much in the interim I wasn’t even sure where the bakery had been.  I asked shopkeepers all over town about Pendl’s but no one knew what I was talking about.

That was the end of it until last weekend when we stopped in the little town of Driggs, Idaho, on our way home from Jackson, Wyoming.  The person we were meeting there told us to come to Pendl’s Bakery and Café.  Could it be the Pendl’s Bakery?  But what was it doing in Driggs?

When I walked into the shop I was transported back in time.  There they were, my dear old pastry friends in the display case!  Among the strudels, cookies, and turnovers, I spied my favorites—the chocolate-coated hazelnut-almond rounds, almond and jam triangles with their bases dipped in chocolate, and circles of candied sliced almonds mixed with dried fruits.  I let out a “whoopee!” and clapped my hands in glee and began telling my Pendl story to all who would listen. 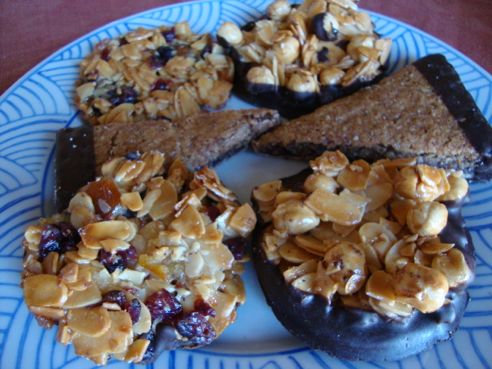 Fred Pendl’s daughter, Martha, told me what had happened to the original bakery.  Her father closed his business in Ketchum in 1989.  He and his wife still live in the area, but he’s essentially retired.  He taught Martha many of his recipes, and when she opened her café in Driggs, in 2003, she began carrying on the family tradition.  Brava, Martha! The café, in addition to pastries, also serves breakfast and lunch.  We enjoyed cappuccinos along with really tasty individual bacon and spinach quiches.

If you want to try the pastries yourself, the café will mail order them.  Call ahead to find out what’s available.