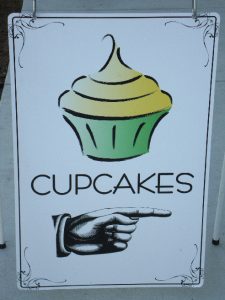 When traveling, I’m always on the lookout for local bakeries. So while my wife and I were in the San Diego area for a few days recently, our concierge, Angela, told us we just had to try the cupcakes at Little Cakes Cupcake Kitchen in Vista, California. She said they made the most adorable and delicious cakes in all sorts of flavors and commanded us to go. She printed out driving directions and sent us on our way.

Little Cakes Cupcake Kitchen is a small shop on Main Street, and the sign outside points you to the way in.

So in we went. The first thing that caught my eye was this Boston Cream Cupcake.

What a stunner! At the time we were the only customers, and a gentleman was on the phone taking a special order. 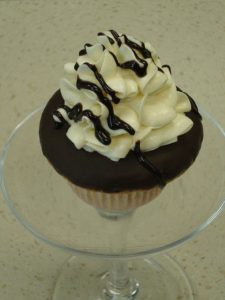 He wanted to put the caller on hold, but I told him to take his time while we looked over all the goodies.

My eyes lit up at the display on the counter—a three-tiered structure with all sorts of little cakes, each a perfect enticement.

And behind it, a rack of trays held many more little gems.

As the man on the phone hung up, a young girl strode in with a big smile on her face, an expression that revealed she knew exactly what she wanted and could taste it even before the little sweet treat was in her hands.

I asked her what her favorite flavor was and she said “Boston Cream, Red Velvet, Chocolate, Vanilla, Coconut…” “I see,” I said, “You like them all.”

I told the girl “Get what you want, we’re not in a hurry.” She wound up buying a Boston Cream Cake and began licking the creamy topping as she walked out of the store. 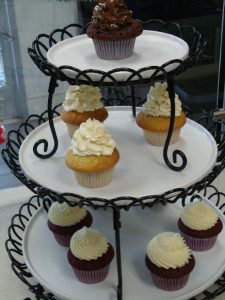 Don Hein, the man who had been on the phone, told me he and his wife, Becky, started the business a little over a year ago. He’s in charge of baking, and she keeps the books. He loves cupcakes for their individuality. “If you’re serving a big cake at a gathering, chances are you’re not going to please everybody. But having several kinds of cupcakes can solve the problem.”

He offers over 100 flavors in all, about a dozen or so different ones each day, including Strawberry Shortcake, Chocolate Stout, Margarita, Linzer Cake, Strawberry Champagne, Chocolate Toffee.  Certain favorites like chocolate and vanilla are always on sale.

Everything is made from scratch and with the highest quality ingredients.

We bought 6 cupcakes, all packed securely in a box, and took them back to our hotel for a tasting. 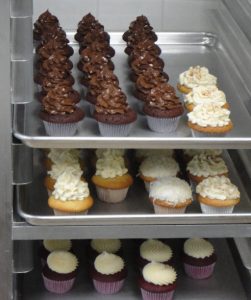 Red Velvet and Chocolate are in the top row; Egg Nog and Boston Cream in the center; and Coconut and Mayan Chocolate on the bottom.

We tried the Red Velvet, Boston Cream, and Mayan Chocolate cakes but had to postpone tasting the others until the next day because the first three were so irresistible we ate every last crumb.

The Red Velvet cream cheese icing was the best I’d ever eaten, and the cake itself was moist with a decided hint of chocolate.

The Boston Cream Cake had a smooth filling of vanilla-flavored pastry cream, a thin layer of chocolate glazing the cake, and a velvety sweet topping. All the textures and tastes blended perfectly.

The Mayan Chocolate cake was moist 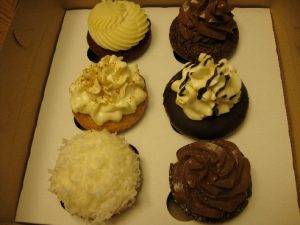 , boasted hints of cinnamon, coffee, and cayenne, and the chocolate frosting echoed those flavors.

The next day we had room in our tummies for the last three cupcakes we bought—egg nog, coconut, and chocolate—and their quality had not suffered in the least.

It’s not often I find a bakeshop whose goods deliver on the flavor their looks promise. Little Cakes Cupcake Kitchen does, and if you’re ever in their vicinity, do yourselves a favor and pay them a visit.

Now, if I could just have one more Red Velvet Cake…. 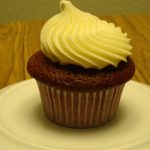 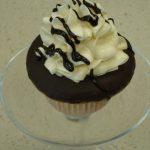 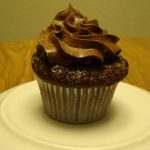