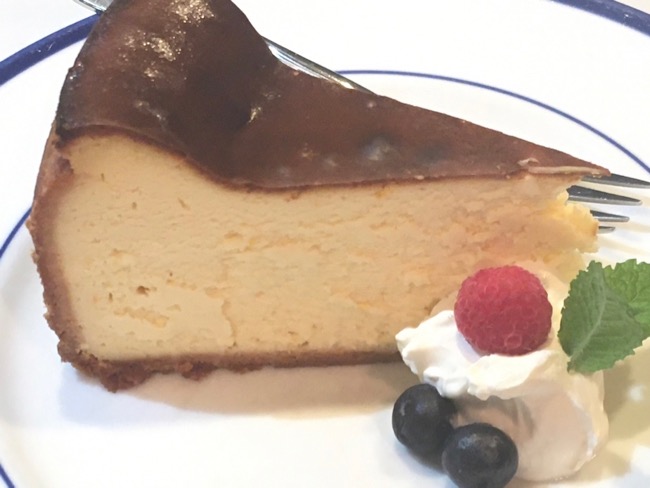 Here is Lindy’s Cheesecake, the famous New York icon. It is my favorite cheesecake in the world. Why? Because its creamy texture can’t be beat, and it sports a pastry crust that insulates it from the intense initial heat of the oven–525 degrees Fahrenheit. The cake’s beautiful dark brown top comes from that inferno-like temperature.  Make sure your oven can accommodate these swings in temperature accurately! Test your oven with an oven thermometer before attempting this recipe.

So Just What Is A New York Cheesecake? Restaurants all over the country serve cheesecakes with the New York moniker. But what does that really mean?  Cheesecakes have been eaten for centuries. The first printed recipe dates to about 1440, when there was no New York.  Molly O’Neill says New York cheesecake derives from an Eastern European-style cake made from cream cheese and pot cheese. Immigrants from that part of the world brought it with them to New York City, and there it was reborn and given its name. But New York cheesecake is not a specific recipe. It is a style.

New York-style cheesecakes tend to have generous amounts of cream cheese and fairly dense (yet light!), smooth creamy textures. The type of crust doesn’t define the cake, but Graham cracker crusts have become extremely popular. Lindy’s Cheesecake, traditionally made with a pastry crust, is a New York cheesecake, even though today it’s apt to have a crust of Graham crackers. But cheesecake didn’t really begin to become a nationwide phenomenon until 1949, when Charles Lubin, a Chicago baker, founded a company he named after his daughter, Sara Lee. The SaraLee cheesecake, its rich cream cheese filling topped with a smooth as butter layer of sour cream, became a marketing phenomenon and a national icon.

1 thought on “Lindy’s Cheesecake: The Recipe”