Greg Patent’s “Baking in America” Goes Out of Print 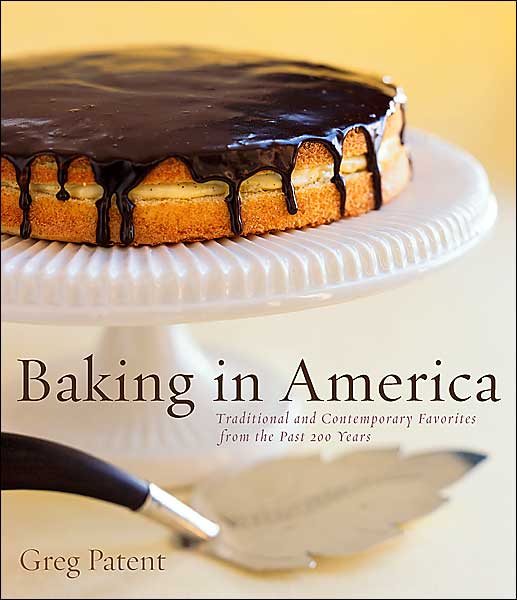 I’ve had a long and happy ride with Baking in America, my cookbook that tells the story of our country’s love affair with baking through 200 years of history since the American Revolution.  Published in the fall of 2002, Baking in America went on to win the James Beard Award for Best Baking Book in 2003 along with the International World Gourmand Cookbook Award.

I am very proud of this book.  In the four years it took to write I traveled all over the country to peruse original editions of historical cookbooks, leafed through pamphlets of ephemera featuring recipes and cookware of American manufacturers, and interacted with dedicated research librarians who fell in love with my project as much as I did.

The idea for Baking in America came to me while I paged my way through Betty Crocker’s Picture Cook Book looking for an inspiration, something to bake, but I didn’t know what.  I’d owned this book since 1950, the year my family and I immigrated to San Francisco from Shanghai, China. I had read it from cover to cover several times, and I always found something new.

As I read it again, I was struck by how American the recipes were, which led me to ask: Where did these recipes come from?  And that led to all sorts of questions about America’s past and how people baked, and what were the butter, sugar, and eggs like, and how did women manage to control oven temperatures, etc.

To get answers to my questions I needed to go to libraries to read old cookbooks, newspapers, and magazines. In my research I found all sorts of recipes that I wanted to bake that had been left languishing in cookbooks from another century.  Why was that, I wondered.  Why were Boston Cream Cakes, Lafayette Gingerbread, Indian Pound Cake, Yeasted Corn Bread, Devil’s food Cake made with a chocolate custard base from 1910 no longer being baked?  So I decided to begin my journey by baking them myself with the full realization that the ingredients I was using—flour, sugar, butter, milk, eggs—were quite different from the ones used by the bakers of a bygone era.

The recipes I read inspired me to create recipes of my own, and so my book is a celebration of America’s past as well as its present.  You’ll find over 200 recipes in Baking in America including savory and sweet yeast breads, quick breads, pound cakes, loaf cakes and sheet cakes, cupcakes and cream puffs, sponge cakes, angel food cakes, and chiffon cakes, Génoise cakes, cheesecakes and tortes, cookies, fruit desserts, and pies and tarts.

The staggering range of what American bakers were able to produce in their home kitchens is awesome.  Just think of the challenges presented by a wood-burning stone oven!  Nevertheless, the hallmarks of the American home baker of the past and present are the same.  They strive for simplicity, straightforwardness, and experimentation.

I recently received sad news.  Baking in America has gone out of print, no longer available in stores.  It’s the end of an era for me, but fortunately, I managed to get my hands on some remaining copies.  So as a favor to my fans, I’m making band-new autographed copies available until March 15, 2013, for just $25 each, including media mail postage, for delivery within the USA only.  And, if you’d like, I’m happy to personally inscribe the books as well.  To order, just click on the gold “Buy Now” button in the far right column.  And thank you all very much.