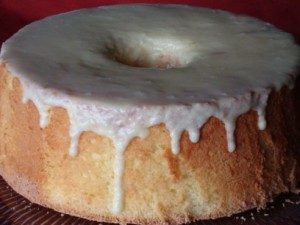 Are you fascinated by how cakes rise, especially cakes made without the help of baking powder or baking soda?  Ever since I was a kid, angel food cake and sponge cake, both rising to magnificent heights solely by the air beaten into them, held a special magic for me.  But how does the magic happen?To help make sense of this example of baking magic, I’ve decided to take my blog in a new direction by focusing on certain baking themes.  And I’ll begin with foam cakes, a class of cakes that magically rise solely by the air beaten into the batter.  Angel food cakes and sponge cakes are probably the most familiar.  Angel food cake contains whipped egg whites and sponge cake an equal number of egg yolks and egg whites beaten separately then folded together.

Génoise, a classic French cake, is also a foam cake and rises by virtue of air beaten into whole eggs.

When creating a foam, whether you’re beating egg whites, egg yolks, or whole eggs, you’re mechanically introducing and trapping air into tiny protein bubbles.  These bubbles expand in the heat of the oven causing the cake to rise.  If the bubbles of air expand too quickly, before the protein around them has a chance to set, the cake will collapse.

And even before the cake gets into the oven, if the eggs, yolks, or whites haven’t been beaten properly to achieve maximum volume, or if the ingredients haven’t been folded together carefully, the cake will not be as light-textured as it should be.

You will always have success in baking if you know why you’re following a particular instruction and just how to do it.  Pay particular attention to folding, a technique that aims to retain as much air as possible in a batter by combining light and heavy ingredients together in the following motion: with the edge of a large rubber spatula, cut down through the  batter from the top center to the bottom of the bowl, then turn the spatula sideways and draw some of the batter from the bottom of the bowl upwards, flipping it over the batter in the bowl.  Rotate the bowl about a quarter turn and repeat the motion over and over, being as gentle as you can, until the batter is evenly combined.  Fold rapidly and decisively. When folding in beaten whites, fold only until no streaks of whites show. Take a look at the series of photos in my angel food cake post to see what I mean.

For the cake, have ready a two-piece ungreased 10 x 4-inch tube pan, preferably with feet.  The pan can be made of plain aluminum or it can be a non-stick pan. Adjust an oven rack to the lower third position and preheat the oven to 325 degrees. 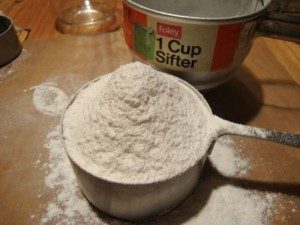 Sift the flour directly into the measuring cups, filling cups to overflowing. 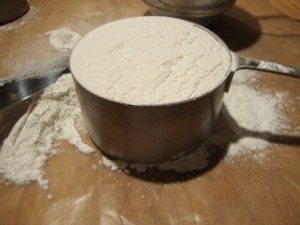 Without moving the cup, sweep off excess with a metal spatula.

Beat the egg yolks and whole egg  until very thick.  While beating on medium speed, gradually add some of the granulated sugar and beat a few minutes more until yolks are thick and pale and form a slowly dissolving ribbon when the beaters are raised.

Beat the egg whites until frothy.

Try a Flat Wire Whip for Beating the Egg Whites

Fold together gently using a large wide spatula, only until no whites show.

Scrape the batter into the tube pan and spread level. Bake about 45 minutes until the top of the cake is golden brown and springs back when gently pressed.

Remove the pan from the oven and cool the cake upside down until completely cool, about 3 hours. Remove from the pan, prepare glaze, and glaze the cake.  Wait about 1 hour before cutting and serving. 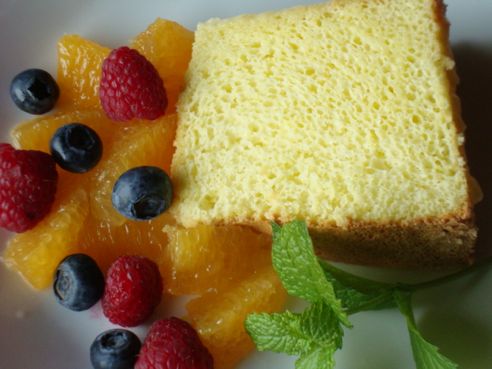 For the cake, have ready a two-piece ungreased 10 x 4-inch tube pan, preferably with feet.  The pan can be made of plain aluminum or it can be a non-stick pan. Adjust an oven rack to the lower third position and preheat the oven to 325 degrees.

In a small bowl, beat the 5 egg yolks and whole egg on medium high speed until very thick, about 5 minutes.  While beating on medium speed, gradually add ½ cup of the granulated sugar  (reserve remaining 1 cup sugar).  When incorporated, increase speed to medium-high and beat a few minutes more until yolks are thick and pale and form a slowly dissolving ribbon when the beaters are raised.  On low speed beat in the zests, orange juice, orange extract, salt, and cake flour.

In the large grease-free bowl of an electric mixer, beat the 8 egg whites with the whip attachment on medium speed until frothy.  Add the cream of tartar and beat on medium speed until the whites form soft peaks when the beater is raised.  Gradually add the remaining 1 cup granulated sugar about 2 tablespoons at a time while beating on medium speed and waiting about 10 seconds between additions.  When all the sugar has been added, raise speed to medium-high and beat a few minutes more until the whites hold a firm shape and form peaks that curl slightly at their tips.

Scrape the batter into the tube pan and spread level.  The pan will be about half full.  Place the pan in the oven and bake about 45 minutes until the top of the cake is golden brown and springs back when gently pressed.

Remove the pan from the oven and set the pan upside down onto your countertop.  Let stand until completely cool, about 3 hours.

To remove cake from pan, run a thin-bladed knife all around the edge of the cake to release.  Lift the cake out of the pan by its tube, and run the knife under the cake to release it from the pan bottom.  Invert the cake onto a cake plate.  The cake bottom is now facing up.  Cover with plastic wrap while you prepare the glaze.

For the glaze, put the strained confectioners’ sugar into a medium bowl.  Add the softened butter, 3 tablespoons freshly squeezed orange juice, and orange extract.  Beat with a whisk or hand-held electric mixer until glaze is completely smooth.  The glaze should be fairly thick but thin enough to spread over the cake and run down the sides a bit.  If too thick, beat in droplets of the remaining tablespoon of juice.

Pour the glaze onto the top of the cake and spread it with a metal spatula allowing some of the glaze to drip haphazardly down the sides.  Let stand at least 1 hour before cutting and serving.

To serve, cut into portions with a serrated knife and serve plain or with some berries.  This cake is best when very fresh.