Baking Tips for Flour: To Measure or to Weigh 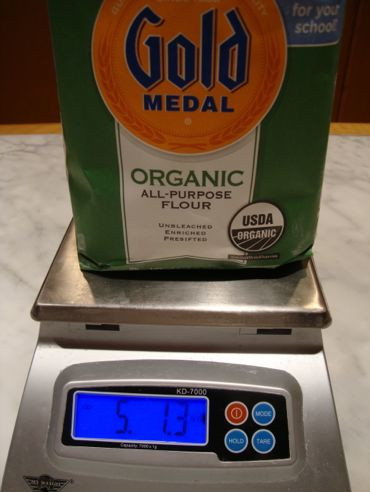 The success of a recipe often depends on how flour is measured. The best way to measure flour is to weigh it.  I cannot stress this enough.  More recipes fail because of the improper amount of flour, and no wonder.  How did the flour get into the cup?  And what kind of cup was it?

I’ve worked with bakers who use a glass measuring cup, designed for liquids, to measure flour.  They’ll shake the cup to level the flour.  And how will that cup compare in amount with someone who uses a dry measure?

Many kinds of scales are on the market, and a scale won’t break the bank.  It’s a wise investment especially if you bake a lot.  The scale in the photo is My Weigh® brand.  I have it at the ready on my counter at all times.  It weighs in grams, kilos, ounces, or pounds, and it’s easy to switch modes by the push of a button.  (Note: I have no financial arrangements with the company; I speak from experience only).  The scale shows the unopened sack of flour weighs 5 pounds 1.3 ounces, which tells me both the weight of the flour and that of the packaging.

If you don’t have a scale, however, there are ways to sort of standardize your measurements.  The weights given below apply only to all-purpose or bread flour.

Most of the time you will measure flour by stirring it in its container to aerate it slightly, spooning it into a measuring cup designed to measure dry ingredients, filling the cup to overflowing, and sweeping off the excess with a metal spatula. A cup of flour measured this way weighs about 41⁄2 ounces.  When sifted flour is called for, put more than you need into a sifter or strainer set over a sheet of waxed paper. Sift and then spoon the flour into a measuring cup, filling the cup to overflowing; do not pack or shake the cup. Sweep off the excess flour with a metal spatula or any straight-sided utensil. Sifted all-purpose flour measured this way weighs about 4 ounces.

A third way to measure flour is to fill a dry metal measuring cup by scooping it into the flour container, filling the cup to overflowing, and sweeping off the excess with a metal spatula. This cup of flour will weigh about 5 ounces.

Cake flour, a soft wheat flour, weighs less when measured by any of the three ways described above. Whole wheat flour tends to weigh a bit more. Generally speaking, accurately measuring flour for bread making is not as critical as for making cakes or delicate pastries.

Notice the word “about” in all of the cup-measuring-methods.  At best, measuring in cups is an approximation.  Weighing is more exact.  Keep in mind, also, that humidity will affect the weight of the flour in a cup.  I live in a dry environment.  If the flour in my container has sat unused for a while it will have lost moisture.  A cup of flour measured by any of the above methods will weigh significantly more than stated.  In a humid environment, flour will pick up moisture and swell, and a cup will weigh less than the amounts given.

Many authors of baking books will favor a particular measuring method.  Nancy Baggett uses the scoop and level procedure (also known as dip and sweep), whereas Nick Malgieri likes the spoon and level way.  Me?  I use either depending on what I’m baking.  But I’ll opt for a scale any day instead of a cup.

What about you?  How do you measure your flour?