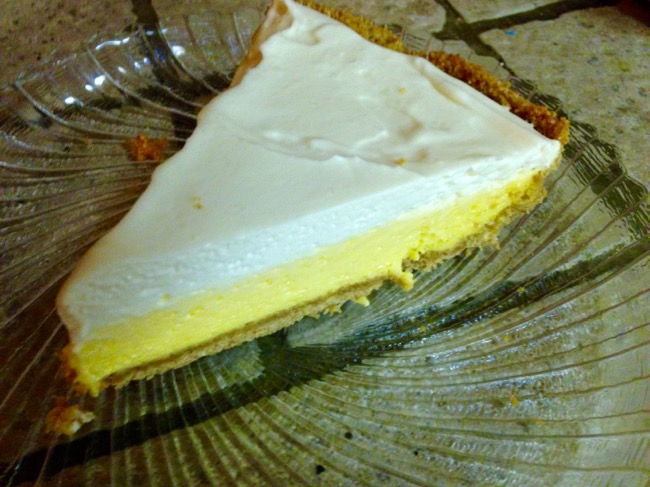 “Ya gotta try the sour orange pie,” our waitress at The Yearling restaurant in Hawthorne, Florida, insisted. “It’s our specialty.” Being citrus lovers, my wife and I perked up and started asking questions. What we learned was this: The pie was most likely a variation of Key Lime Pie with sour orange juice subbing for the lime. It had a Graham cracker crust and was served with a sauce. So we happily asked our server to “Bring it on!”

Here’s what she brought us.

A cream layer topped the pie and a tangy orange sauce bathed its base. Extra squiggles of whipped cream were added for good measure. The pie itself was tart and its texture a tad firmer than Key Lime Pie. Before we knew it, the bowl was empty and we felt we should’ve ordered two portions.

Our waitress, seeing how much we loved the pie, offered us the opportunity to pick some sour oranges off the tree on the property if we wanted to try making the pie ourselves. This we did. On our way to the tree we happened upon the restaurant chef sitting outside on a break and I asked if I could please have the recipe for the pie. No dice, she said (well, not those actual words, but there was no mistaking her meaning).

After stashing the sour oranges in our car we drove the short distance to Marjorie Kinnan Rawlings’s former home in Cross Creek, where we were shown around the house and regaled with stories about her personal life as a writer (she wrote “The Yearling” among many other novels and short stories) and were told what a great cook she was. As we were leaving, I asked our guide about sour oranges and he pointed to a tall tree bearing small orange globes of calamondins, a very sour orange resembling a small tangerine. He said we could pick some of those if we wanted. So off we went and harvested a bunch of them.

Sour oranges on the left, calamondins on the right.

That night I went online to see what I could find out about sour oranges and I learned plenty from Robin Draper’s fabulous website. She has two excellent recipes for the pie: One is like a key lime pie and the other more like a lemon meringue pie. Even though you many not have access to sour oranges or calamondins, she shows you how to substitute a combination of fresh orange and lemon juice and fruit zests for the sour liquid.

I made both versions of her pies when we were staying with friends near Tampa, and we all liked both equally, even though they’re entirely different pies!

Be sure to make your own Graham cracker crust. Please don’t even think about using a pre-bought one.

As for the sauce, I boiled down 2 cups of sour orange juice with about 1 3/4 cups sugar (Yes, that much!) until syrupy, about 5 minutes. After cooling and chilling, I passed a pitcher of the sauce to be poured around the base of the pie. Delicious!