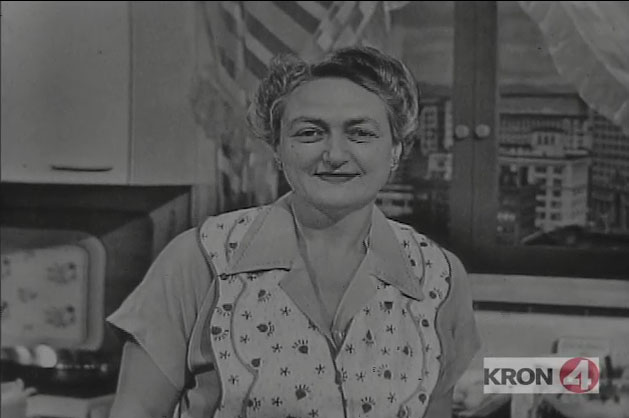 Julia Child may be the most famous TV cooking teacher, but she wasn’t the first.  TV cooking shows began in the 1940s when the medium was in its infancy, and they really caught on with the public.  These popular shows, for the most part, were locally produced.  And they were often broadcast live, impossible to achieve in today’s over-produced cooking shows.  The cooking show teacher who got me started cooking was Edith Green.My family and I emigrated to San Francisco from Shanghai in 1950.  My Dad loved to watch sports, and television offered him that pleasure often from the comfort of our living room.  I loved the drama of old movies and adventure serials such as Flash Gordon and Don Winslow of the Navy.

One day when I stayed home from school sick, I happened to catch a cooking show hosted by this smiling lady with a friendly inviting voice named Edith Green.  She reminded me so much of my Granny, whom we couldn’t bring with us to America, that I just had to keep watching.

Edith Green put things into a bowl, mixed them up, scraped what she mixed into a pan, put it into the oven, and a few minutes later out came a cake!  What magic.  Her show was on KRON-TV live five days of the week, so from then on I’d watch her every chance I got. I jotted down recipes on scraps of paper just in case I’d have the courage some day to try them.

Live television, the norm during the 1950s, was terribly exciting because anything could happen.  On one show I remember Edith Green burned a pie crust.  While she was talking I could see wisps of smoke coming from the oven; when she realized what was happening she yanked open the oven door and pulled out the hopelessly charred crust.  “What a calamity!” she exclaimed.  But then, in her cheery fashion she said, “Oh, well, I’ll just make it again for you tomorrow!”

Seeing the way she handled that disaster that gave me the courage to try my hand at baking.  If Edith Green could make a mistake and laugh it off, so could I.  By the time I was 12, I had been baking for almost a year, and I wrote to Edith Green telling her of the success I had with one of her recipes.  You can imagine my surprise when she read my letter on her show.  Such a thrill!  And when I became a finalist at the age of 18 in the 10th Pillsbury Bake-Off, she wrote me a letter of congratulations.

Edith Green started me on my path as a TV cook, food writer, and cookbook author. And recently she entered my life again thanks to Dana Polan, author of the book Julia Child’s The French Chef (Duke University Press, 2011).  In his book, Mr. Polan discusses The French Chef in the context of cooking shows that preceded it, pointing out how different Julia Child was from all other cooking teachers because she emphasized the pleasures of cooking and eating and always ended her programs by serving her food in the dining room that was part of the set.  And her show was commercial free because it was on educational television.

Edith Green, on the other hand, and many other cooking teachers of that era, integrated commercials during their demonstrations.  Commercial TV depended on sponsors, and including ad spots within a program allowed the show to proceed without a break.

Although Edith Green’s show, Your Home Kitchen, was broadcast from 1949 to the mid 1950s, only one of her programs survives for us to see.  Mr. Polan sent me the link, and I’m happy to share it with you.  I’d love to get your reactions.

It’s such a thrill for me to watch Edith Green once more.  I feel as if I was 11 years old again, watching her weave her magic over me for the first time.