Rancho La Puerta, in Tecate, Mexico, about 40 miles east of San Diego, is recognized as one of the world’s best spas.  The photo shows the dining hall in the background with people eating outside on this sunny, warm day.  Lush, colorful  vegetation greets us on every walking path.

I’ve just returned from spending a week there, teaching cooking classes, eating healthy meals, and generally resting up.  The six-acre organic garden located just outside the cooking school provides the vegetables for the classes.  When the students arrive, we all take a walk in the garden, guided by Salvador, the most passionate gardener I’ve ever met.

Sometimes I’ll change a recipe on the spot if Salvador shows me a vegetable that is plentiful and at its peak.  I had intended to make a celery root soup, but the roots were way too small, so Salvador suggested I use salsify instead.  The flavor of these two roots is entirely different, so we just adjusted the seasonings.

Most of the classes are hands-on, which is why they’re so popular.  The kitchen island easily accommodates 16 cooks, and the gas cook top has about a dozen burners, a large grill and large griddle.  Three ovens handle any baking needs.

For one class, featuring Greek Greens Pie, I demonstrated how to make the pastry with a food processor.  I used water with a tad of cider vinegar as the liquid, and I was amazed to find that practically no one in the class had heard of using vinegar in pie dough as a tenderizer.  Acids inhibit gluten activation, and in an all-butter crust, where butter itself has a water content of about 18 per-cent, it’s important to minimize its effect on gluten. 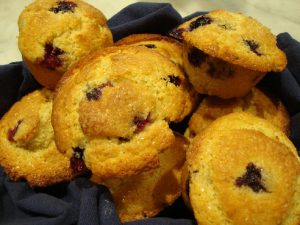 One student told me it was worth the price of the class just to learn this tidbit.  Lesson for me: don’t assume something I’ve known for decades is common knowledge today.

I also taught classes in gluten-free cooking and baking.  About 20 people who came to the ranch that week had a sensitivity to gluten.  Gluten-free cooking is easy so long as one uses gluten-free grains such as quinoa, millet, and buckwheat, for example.  We made a perfectly delicious tabbouleh substituting quinoa for bulgur.  And two of the students put together a terrific yeasted rosemary focaccia using a gluten-free flour blend. 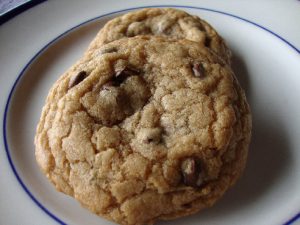 In the baking class I made gluten-free blueberry muffins, lemon squares, chewy chocolate chip cookies, cream puffs, and a show-stopping chocolate almond torte with chocolate ganache.  Ground nuts are an excellent substitute for flour, and many torte recipes are naturally gluten-free.  One of the students claimed she never baked, but wanted to learn.  After watching me, she said she’d lost her fear, and would make the cream puffs when she got home. I say brava!

What I love about my classes is the camaraderie and excitement the cooks have.  It’s kind of a miracle when groups of people, most of whom don’t know each other, gather together to cook.  In two hours of shared work, they produce a menus of seven or eight dishes, and we all sit down and eat together, commenting on the food, and enjoying each other’s company.  It’s as though we’ve become a family.  And in a way, we have.