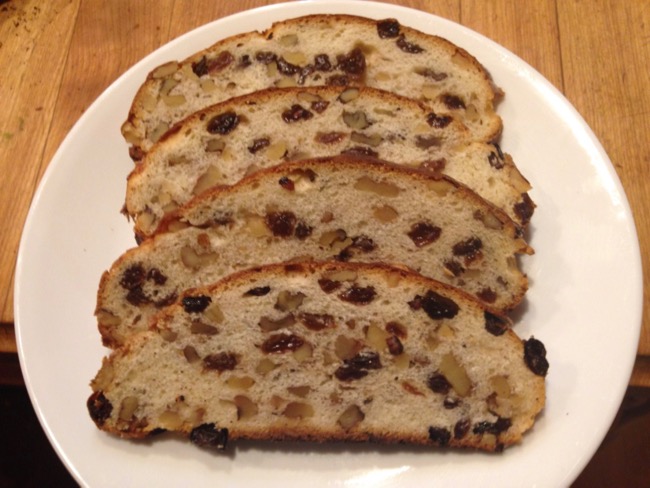 My friend, Julia della Croce, an authority on real Italian food, and whose forktales blog is a must-read for news about Italian food and travels to Venice, has generously written an introduction to this extraordinary bread that we devoured on a recent food trip to Milan and environs. I cannot thank the Italian Trade Agency enough for the nourishment and education I received on this fantastic excursion into one of the most delicious regions of Italy. Bisciola is pronounced bee-shee-OH-la. Its plural is bisciole.

Recently, Identità Golose, an organization of premier Italian chefs, and the Italian Trade Agency, invited me to tour Lombardy along with master baker and food writer Greg Patent and a group of other curious American food writers. While we were dazzled by the likes of Carlo Cracco, Massimo Bottura, Riccardo Camanini, Paolo Lopriore and other stars of the Italian culinary world and treated to some of the best food Milan had to offer, the dish that won my heart was a dense, sweet bread I spotted on the breakfast table at La Fiorida, a little agriturismo and working farm in the Valtellina Valley. Also known as biscieùla, pan di fich (“fig bread”), panun, or panettone valtellinese, the paste was moister, and so thick with walnuts and raisins that you would hardly think you were eating “bread” at all. It was nothing like Milan’s panettone which, if studded with fruit, is light and buttery, much like pastries in the brioche family.

Granted, this wasn’t any ordinary agriturismo, by which the Italians mean a place where you can go to have a farm vacation. There was a Michelin-starred restaurant, La Prêsef, on the premises, with visionary chef, Gianni Tarabini, at the helm. The kitchen in this northernmost province of Milan that is backed up against the wall of the Alps, to borrow an apt description from the pen of Waverly Root, was putting out typical dishes of the area, if reconstructed for the modern palate.

The loaf that emerged from the same kitchen, like most Italian recipes, has a story. Most of the cooking in this isolated part of the world developed quite apart from what the faraway big city was doing, It appears that we have Napoleon to thank for this little bread, which goes back to 1797 when he stopped in the valley on his sweep through northern Italy. Having a sweet tooth, he asked his cook to make him whatever confection he could whip up, even if there were only dried fruits, nuts, and the usual staples of the valley available, and voilá, bisciola was born.

I bought a loaf and brought it back home to New York. When I unwrapped it—at that point, two weeks after I had bought it— it was virtually as fresh and moist as the one we’d eaten in Italy. I asked Greg if he would consider trying to reproduce it. Here are his step-by-step photos as he was making his sixth version.  The full recipe follows. 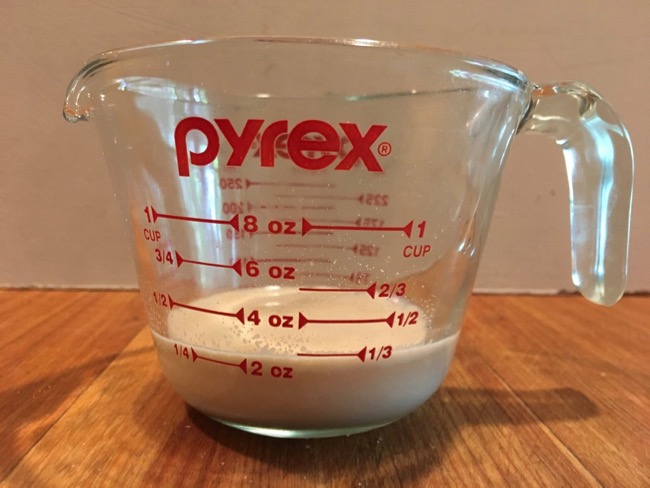 Sprinkle yeast over warm water with a little sugar stirred in. 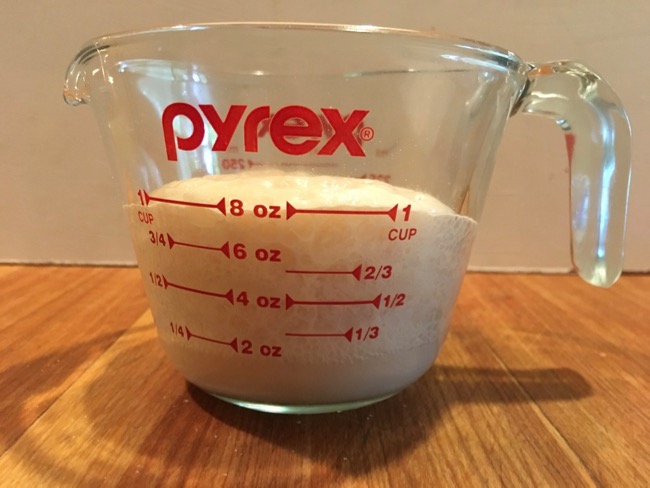 In about 10 minutes the yeast foams up showing that it’s alive and active. 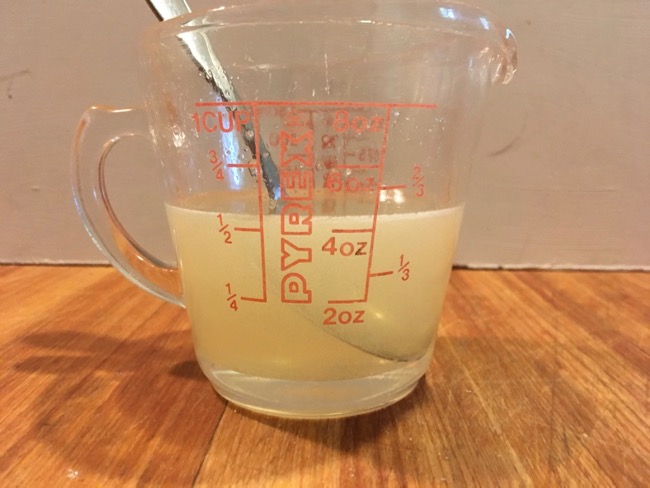 Sugar and honey stirred into warm water until dissolved. 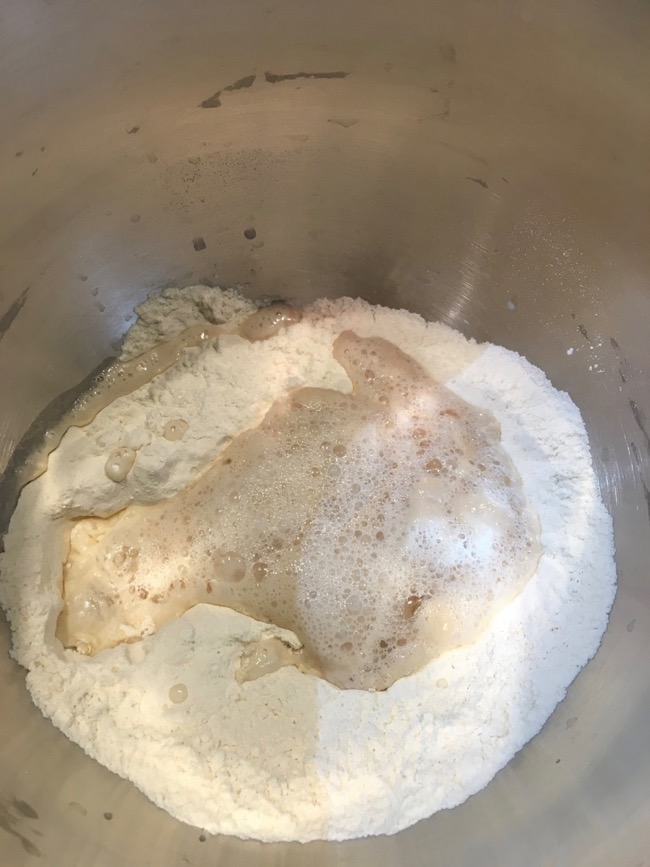 Foamed yeast is added to the flour mixed with salt in the bowl of a stand mixer. After attaching the dough hook, the machine is set to a low speed and the sugar, honey, water combo is dribbled in gradually. 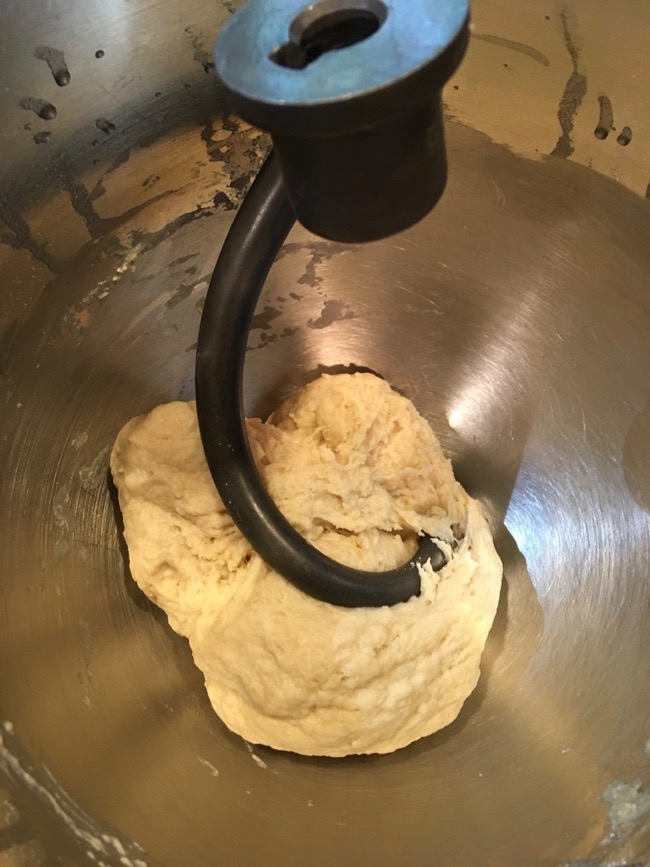 The dough masses onto the dough hook and is ready to have the soft butter added a bit at a time. Note the roughness of the dough at this point. 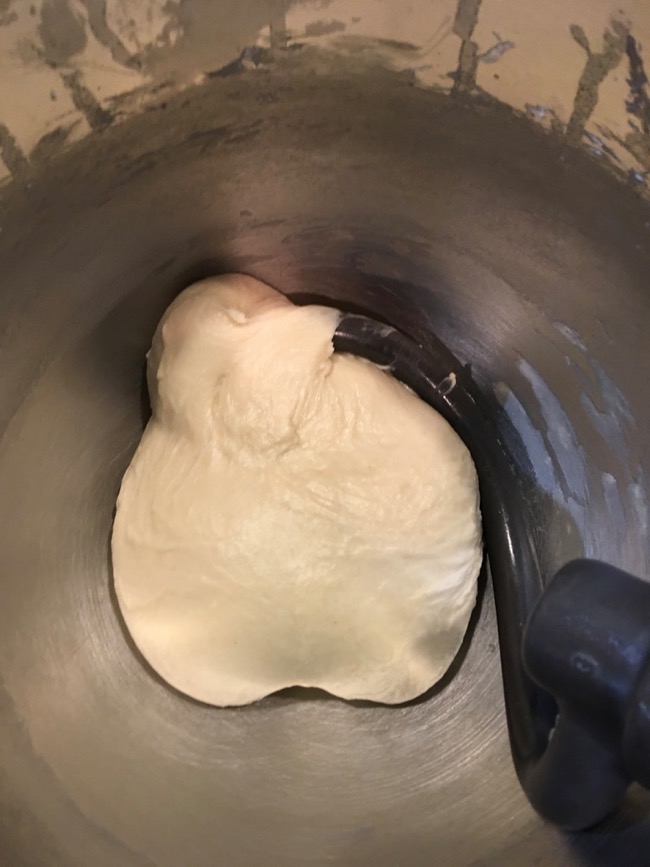 Fully kneaded dough. See how smooth it is? Turn the dough out onto a lightly floured surface and shape it into a taut ball. Put the dough into the mixing bowl coated with nonstick spray.

Here’s the dough in the lightly oiled mixing bowl ready to be covered and set aside to rise. 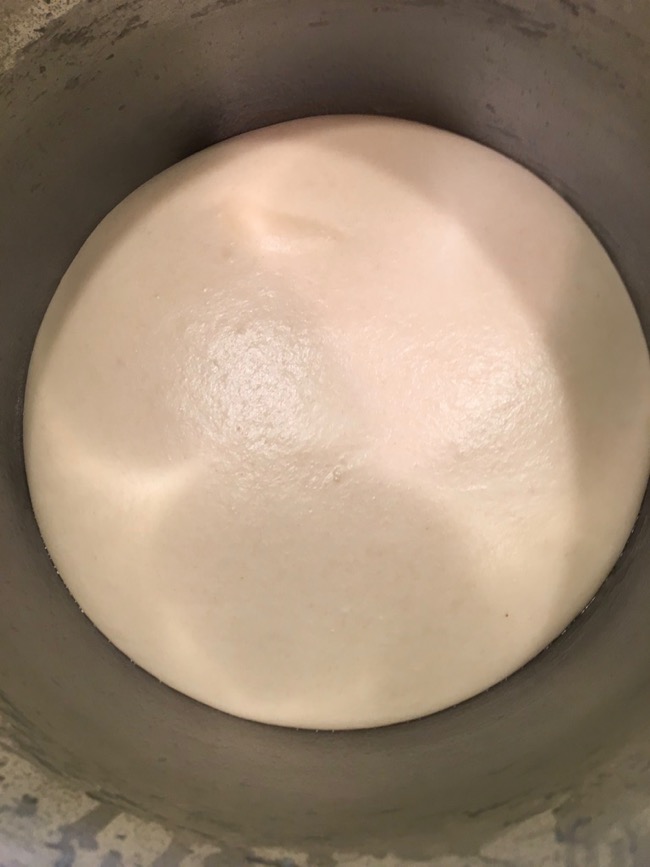 The fully risen dough, about twice the size of the original. It’s ready to be stretched and filled with the walnuts and raisins.

Stretch the soft and non-sticky dough on an unfloured surface into a rectangle measuring about 17 x 14 inches with the 14-inch-side nearest you. 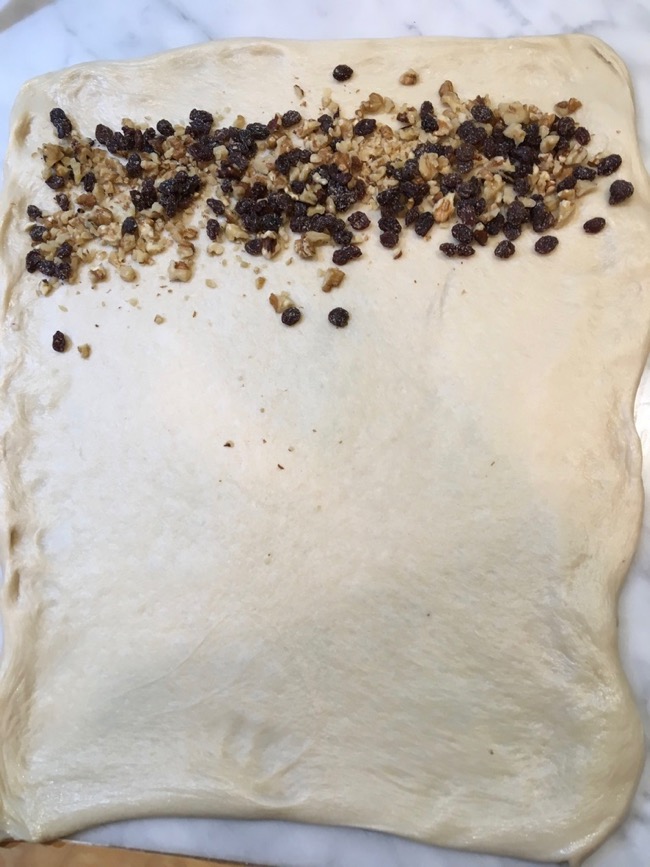 You have 1 pound of mixed raisins and walnuts to incorporate into the dough. I find it easiest to do it in steps. Sprinkle some of the fruit and nuts in a band near the far end of the dough and fold the bare dough over the filling. 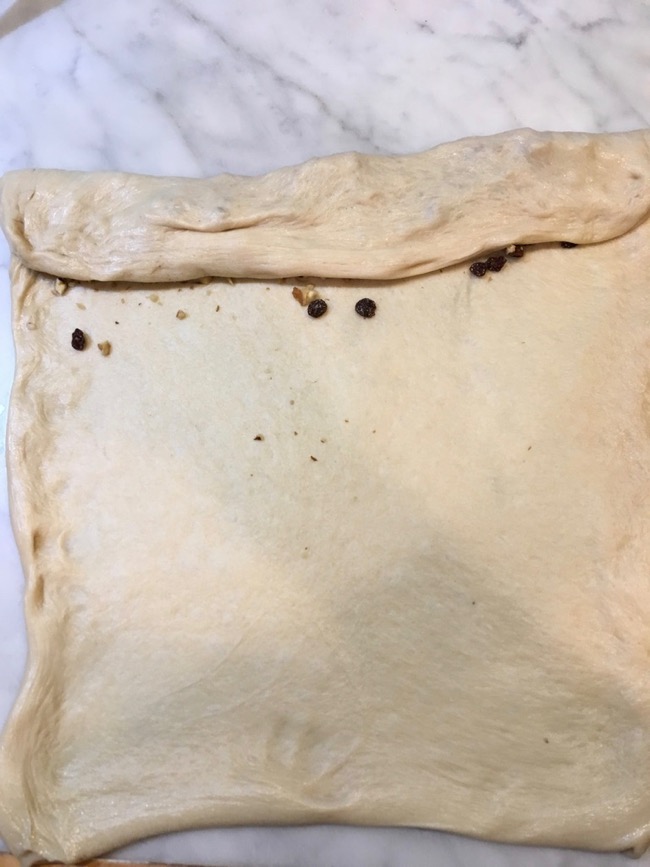 Repeat this process of adding more filling and folding about 4 more times. 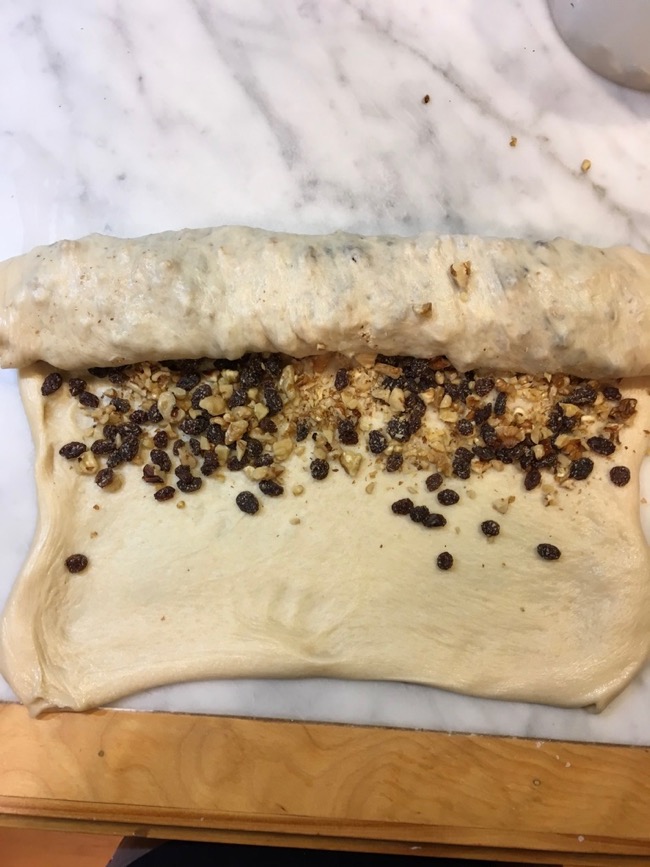 Here’s the completely filled dough. Make sure to pinch edges to seal. Then fold and knead the sausage-shaped roll into a ball. 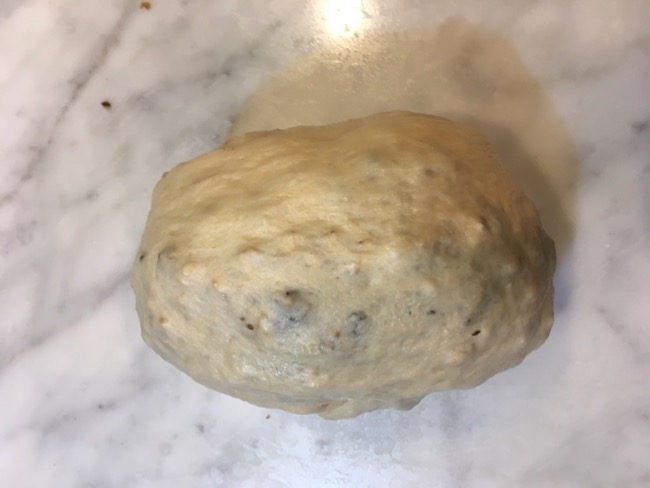 Here’s the kneaded dough with all the raisins and walnuts enclosed. 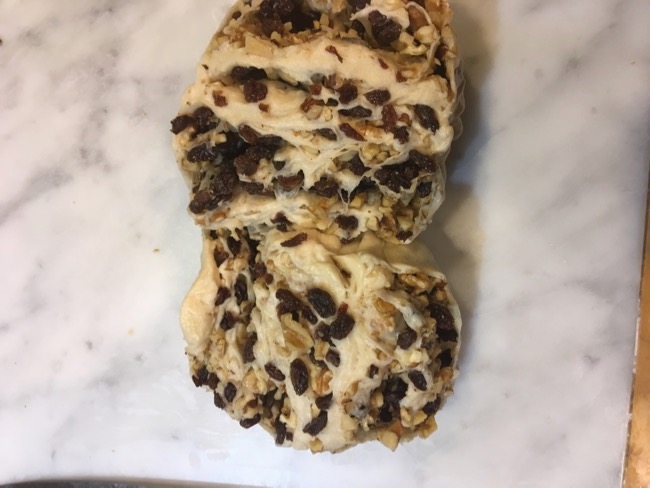 And here’s the walnut- and raisin-filled dough cut in half. Amazing amount of filling! 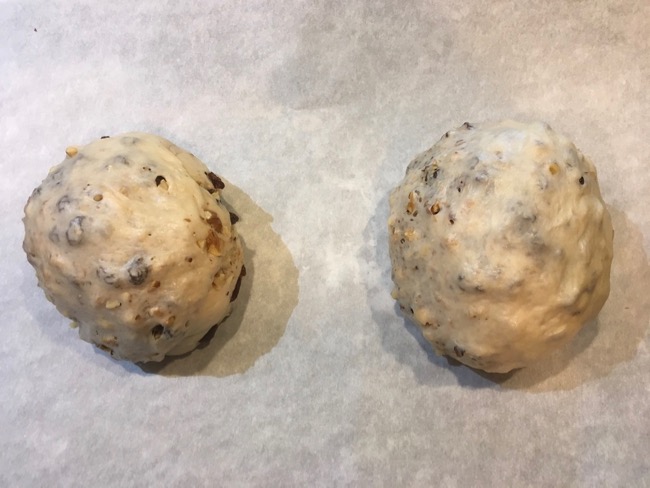 Reshaped cut halves into individual bisciola loaves. Make sure to seal the loaves well. Set the loaves on a parchment-lined baking sheet and cover loosely with a kitchen towel. Let loaves rise about 45 minutes just until slightly puffy. 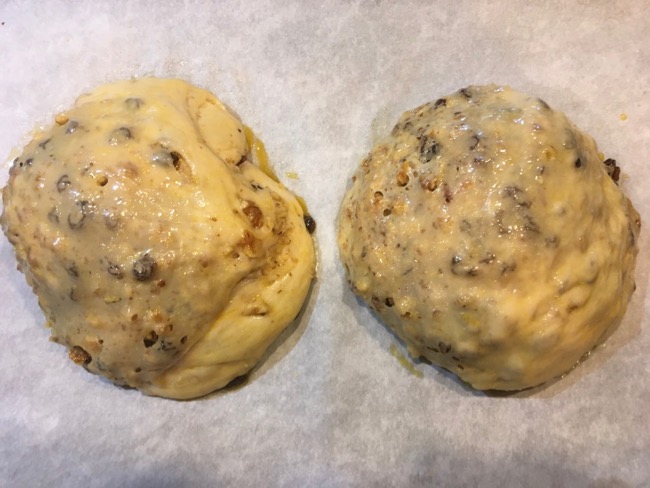 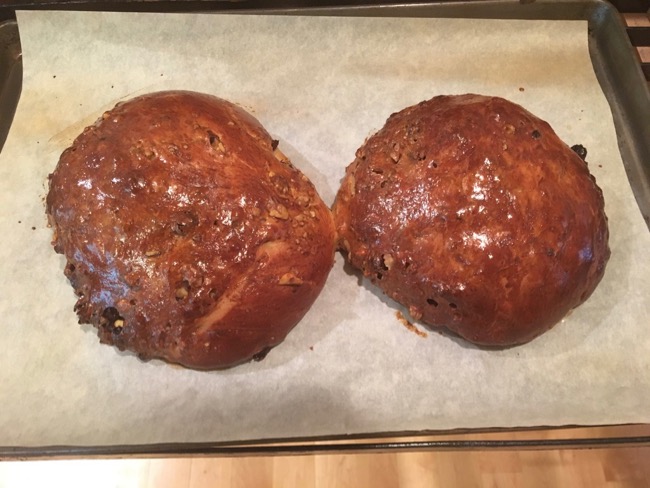 The baked bisciola, a shiny dark brown. Cool completely on a wire rack before serving. 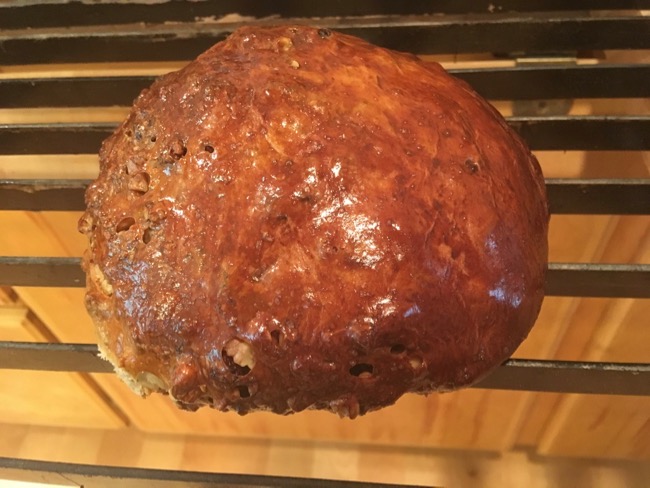 Almost ready to eat! I promise you that bisciola is actually better if you wrap the completely cooled loaf in a kitchen towel and let it stand overnight before serving. Serve with butter, jam, or cheese. Have fun making this!

When I was sent this recipe, it consisted of a list of ingredients with virtually no instructions except for the baking temperature and time. Oh, one more thing: I had to scale the amounts down eight-fold. The original quantity of flour was 2 kilos and the weight of walnuts and raisins 2 kilos each. The yeast dough is not very sweet and it is a dream to work with. But how to get all the nuts and fruit into the dough? Many trials later I hit upon the following scheme: Because the dough is soft and very stretchy, I decided to incorporate the walnuts and raisins into the dough in small amounts, rolling the dough around each addition before putting more nuts and fruit onto the dough. Just follow the pictures and you’ll be home free. This recipe makes two round loaves, each weighing about 1 pound. Bisciola keeps very well at room temperature for at least a week. Just slice off what you need and keep the rest well-wrapped. The bread freezes beautifully for a few months.

Egg glaze: 1 egg beaten with 1 teaspoon water and a pinch of salt

5.Transfer the dough to a lightly floured surface and knead by hand to form a smooth, round ball, about 30 seconds. Lightly grease the mixer bowl and put in the dough, seam side down. Cover tightly and let the dough rise until doubled, about 2 hours.

Makes 2 bisciola, each weighing about 1 pound.

6 thoughts on “Bisciola : A Legendary Italian Fruit and Nut Bread”