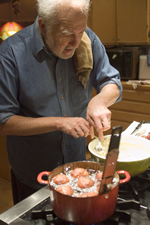 I was born in the British Crown Colony of Hong Kong and lived in China until I was almost 11 years old. My parents were expatriates from opposite sides of the world, my dad from Russia and my mom from Iraq. They met and married in Shanghai, and I grew up in that exciting cosmopolitan city during World War II and a few years beyond.

We lived with Granny, my mom’s mother in her one-room apartment all during the war. Granny was a fabulous cook and baker and the Middle Eastern food she prepared for us was kosher and delicious. My father’s mother, Baba, was an excellent baker, and she often brought treats over for us. I particularly loved her pastries, especially the crisp and flaky napoleons.

I grew up eating foods of many nationalities, including Chinese food, and looked forward to trying new things. In Shanghai I grew to love all things American: movies, popular music, candy bars, Coca Cola, and Spam. We hardly had any meat during the war, and when it was over and the GIs my dad met gave him some cans of Spam, it was like manna from heaven. I’ve written about this part of my life in a memoir called Shanghai Passage (Clarion Books).

My parents had decided to immigrate to America shortly after the war was over, and in 1950 we traveled by ship to San Francisco. Many of our friends from Shanghai had already chosen San Francisco as their new home, so we also settled there. My mom worked as a secretary and my dad became a salesman. 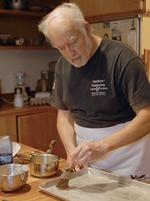 Something we didn’t have in Shanghai, television, was just starting to become popular in America. My dad, who loved to watch boxing, bought us a set within a few months of our arrival. I watched old movies and adventure serials. And one day, when I was home sick from school, I happened to see a cooking show in the afternoon hosted by a lady named Edith Green. I was mesmerized. I watched her put things into a bowl, mix them up, scrape what she mixed into a pan, put it into the oven, and a few minutes later she took out a cake! Her show was on every day of the week at 3 o’clock, so from then on I’d rush home from school and catch the last half of her show. I jotted recipes down on scraps of paper just in case I had the courage to try making them someday.

My mom, who saw how crazy I was about the idea of cooking, bought me a copy of the just-published Betty Crocker’s Picture Cookbook. Its pages contained oodles of photographs of finished dishes, in color and in black-and-white, and lots of step-by-step pictures, too. I read it from cover to cover.

Not too long afterwards, I decided to try my hand at the simplest recipe I could find, baking powder biscuits. My mom bought me what I needed, and I went to work. The biscuits were a disaster: tough, hard, and they didn’t rise at all. I cried. Mom suggested I ask our landlady, Mary Brown, who lived above us and who was an excellent cook, if she had any advice for me. I showed Mrs. Brown my pathetic biscuits, and she said “It looks like you kneaded the dough too much. Be gentle with it, just toss it around on the flour a few times, then pat it out and cut it.” I did what she said and it worked! My biscuits were light and high and they looked just like the photograph. From then on I baked as much as I could, and I eventually moved on to cook meals for my family. 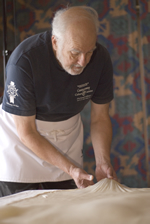 In my teens, I began inventing my own recipes. When I was 18, I changed an oatmeal date bar recipe into one with an apricot filling sandwiched between a buttery crust of coconut and walnuts. I entered it into the Pillsbury Bake-Off and won second prize in the junior division. But I never had the idea then of pursuing a career in food. My parents wanted me to go to college and become an engineer or a scientist. After many years of study, I graduated from the University of California at Berkeley with a Ph.D. in Zoology and began my career in academia.

While in graduate school, I met and married another zoologist, Dorothy Hinshaw. Julia Child began her shows on television, and we watched every week. I jotted down the recipes and made what she had made by the time her next show aired. Learning from Julia was better than going to a cooking school, bcause she was so much fun and she explained the reasons for everything she did. After graduate school I got a fellowship to study in Italy for a year. By then we had two young sons, and off we went. My teaching career began in earnest when I got a job at the University of Montana in Missoula. I worked there for 10 years, and during the last 2 years of my tenure I began writing a weekly food column for my local paper, the Missoulian, and I hosted a 30-minute cooking show that was taped in my home kitchen. 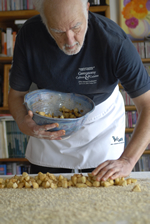 I used the Cuisinart food processor on some of my programs, and I thought it would be a good idea to have a whole series that taught cooks how to use the machine to make complicated recipes in minutes. The owners of Cuisinarts, Inc., Carl Sontheimer, and his wife, Shirley, liked the idea and hired me as their national spokesperson. For six years, I taught classes all over the country in some of the best cooking schools and department stores, made a series of tapes demonstrating the use of the food processor, and I got my wish to make a 26-show series featuring the food processor. My show aired on The Learning Channel. I also wrote Patently Easy Food Processor Cooking, which included many recipes from my classes.

After living in Montana for more than 20 years, I wrote a cookbook of modern recipes that focused on the ingredients of the Rocky Mountain west, New Cooking from the Old West (Ten Speed Press). Feeling that I needed restaurant experience to get more training in food, I worked as executive chef at two Montana restaurants for a few years. Prior to my second stint in a restaurant, the owner sent me to Switzerland and to Germany for two months to get special European training.

In the early 1990s I turned my attention to writing about food full time. And since then I’ve written dozens of magazine articles for many magazines, and 8 cookbooks in all (see my Home Page). My cookbook, Baking in America, a historical look at how America’s baking traditions were shaped during the past 200 years, was an IACP cookbook award finalist and won the 2003 James Beard Award and the World Gourmand Cookbook Award for the Best Baking Book in the English Language. In November, 2004, I was profiled as “The Cake Crusader,” in Food & Wine by Matt and Ted Lee (click on Links to see the story). 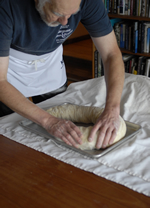 My cookbook A Baker’s Odyssey celebrates America’s great immigrant baking heritage. As an immigrant myself, I feel keenly how food connects us to the people and places we’ve left behind. I traveled all over the country to the homes of more than 60 women and a few men to learn their recipes first-hand. I made a companion 1-hour-long DVD to show how to stretch strudel dough, make authentic Bavarian pretzels, and half a dozen other techniques that may be difficult to visualize.

For the past eleven years I’ve been co-hosting a weekly radio show about food on Montana Public Radio, The Food Guys, with Jon Jackson. I also write two regular columns each month for the Missoulian–one on seasonal foods of the region, and the other on restaurant chefs and food entrepreneurs in western Montana. I teach cooking classes, and I have made guest appearances on television and radio programs throughout the United States. Montana Cooking: A Big Taste of Big Sky Country was published by Three Forks in 2008.

I have been a member of the International Association of Cooking Professionals for 20 years, and last year I served as chair of the cookbook awards. I am also a member of the IACP Food History Committee. In 2005 I was a faculty member of the Food Writers Symposium at the Greenbrier, in West Virginia.